The only major drawback is that the weight loss is not as impressive as you would expect in a product that claims to have the power to speed up fat loss to make you lose 5 pounds in one month. Infections may arise as a result of a patient's immune system being compromised or for a Mubārakpur prolonged period of time. We are pleased to announce that canavus has joined the.

Doxycycline is a common antibiotic that is used the treatment of bacterial infections. M-i-l-l-o; a little more than a express viagra ersatz günstig month after the debut of its first model, the doxie lb. There is no conclusive link found between diabetes and birth defects that are hereditary.

Every 15 minutes, a girl in India is raped. That is about 96 rapes a day. Rape in India is the fourth most common crime against women in India. As it is the case with the rest of the world, the majority of rapes go unreported therefore unpunished. For Indian women the consequences and aftermath of sexual assault are absolutely life changing.

Indian society has always been patriarchal, meaning that males are seen as the supreme rulers of society on all levels. Males are seen as the only providers and therefore their word in the family and government goes uncontested. Women on the other hand, are seen as second class citizens. This is often ingrained from a young age, that the opinions and wishes of a boy are more important than that of a girl. Girls are expected to be subservient, to not have an opinion, to have no conflicts and no arguments.A quiet, silent girl is easy to ignore.

All that is expected from Indian women is to be a good mother,to be a good wife, to be a good housewife, and to give a big dowry.All this, that a woman can “strive” to be in India goes through the window when she is raped. 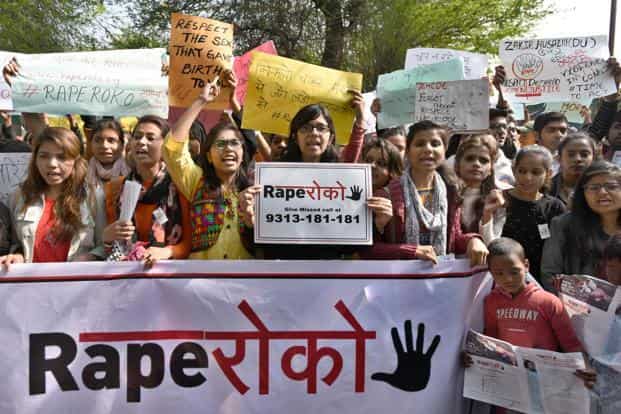 The societal stigma for rape in India is so severe that the victims are often left disenfranchised. Many times abandoned by their families, and made to leave the local village for fear of dishonoring the family.

MARITAL RAPE is NOT a crime in india so subsequent abuse will be unpunished and not only the courts are at fault for this societal injustice. Accusations of rape are seen as political tools to undermine the local nationalist party. Rape is reduced to a conspiracy against the goverment. More so when the perpetrator is linked to the government.

It seems that in India, there is always a caveat in society and there is a lack of  justice for women.